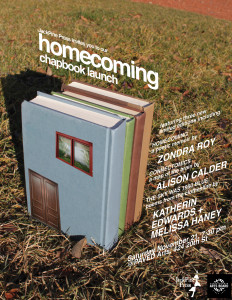 On Saturday, November 21st 2015, join us at PAVED Arts in Saskatoon as Alison Calder returns to the city in which she grew up, Zondra Roy releases her debut poetic memoir, and Katherin Edwards and Melissa Haney release their blueprinted chapbook of poems from the clothesline. This is a little bit about them and their work:
homecoming by Zondra Roy
For her poetic memoir, Zondra Roy chose a title that might remind her readers of an extravagant coming-of-age pageant. For the author, however, it points to an ongoing process of self-discovery, reawakening and the pursuit of home. This short but fascinating narrative details the Cree, Dené, and Métis woman’s coming-of-age; it is the story of a girl with a penchant for poetry and spoken word who uses her work to search for her identity, purpose, and place.
Zondra “Pricelys” Roy, who also goes by “Zoey,” is an activist, spoken word poet, emcee, community-based educator and social entrepreneur. With roots stemming from Stony Rapids and Cormorant Lake, Manitoba, Zoey grew up in rural, remote, and urban regions all over Canada.
Zoey has been working closely with various organizations and youth from across Canada and around the world. She has received high recognition for her innovative approaches in addressing social issues through positive movements and education. Zoey founded Rock the Vote in Saskatchewan, which turned into a Canadian movement during the 2011 Federal Election and mobilized disenfranchised populations and increased informed decision makers in marginalized communities. Zoey is a social entrepreneur specializing in community engagement through the arts – she does this through poetry, film, projects, and events and through public art. Her greatest passion is building social infrastructure with youth in community and believes the arts is an inclusive way to make that happen. She believes art brings community together by eliminating barriers of the “isms” and building bridges of understanding where healthy relationships can be fostered. She is a Canadian Heritage Success Story for 2012, a recipient for the Queen Elizabeth II Diamond Jubilee Medal, recipient for the 2013 YWCA Women of Distinction Award, recipient for the 2013 National Aboriginal Youth Achievement Award for the Congress of Aboriginal Peoples and the 2016 Metis Youth Award recipient for Indspire. Zoey attends the University of Saskatchewan in the SUNTEP program pursuing a Bachelor of Education which will be completed Spring 2017. Working with and for youth is where Zoey’s heart lies. Her goal is to inspire people to become educated but recognizes inequalities exist and she will continue to take an educational approach through her work and support young people to become leaders.
Connectomics by Alison Calder
“Roughly speaking, the goal of connectomics is to improve ways to map the neural connections in the brain,” Calder writes. In this poetic wiring diagram, she mines memory, fear, darkness, and the unknowable, and “turns the microscope upon the veiwer.” The result is a beautiful and sometimes terrifying constellation of images that will stick with you, like “a box of books you move from house to house to house.”

Alison Calder grew up in Saskatoon.  She’s published two collections of poetry:  Wolf Tree (2007), which won two Manitoba Book Awards and was shortlisted for both the Pat Lowther and the Gerald Lampert awards; and In the Tiger Park (2014), which was a finalist for the Lansdowne Poetry Prize.  She is also the co-author, with Jeanette Lynes, of the JackPine chapbook Ghost Works:  Improvisations in Letters and Poems.  This summer, a set of poems from her “Connectomics” sequence won a Manitoba Magazine Award.  She now lives in Winnipeg, where she teaches Canadian literature and creative writing at the University of Manitoba.

The Sky was 1950 Blue by Katherin Edwards and Melissa Haney
This series of poems shines a light on a protagonist confined by the many layers of wallpaper closing in on her, her clothesline of costumes, her husband’s sharpened knives, all confined in “less air than a fly needs as it hammers a window to escape.” Illustrated by Haney, the book’s cyanotype cover was literally developed in the sunshine. The same printing process, using photosensitive chemicals, was used by engineers well into the 20th century as a simple and low-cost method of copying drawings, also called blueprints.
Katherin Edwards is a graduate of the University of Victoria creative writing program (2007). Her poetry has appeared in ARC Poetry Magazine, The New Quarterly, and the Malahat Review, and has won the Malahat Prize for Poetry in 2012, and the Ajax Poetry Prize, among others.
Melissa Haney graduated from the Emily Carr Institute of Art and Design in 2006. She has worked as a book designer, illustrator and pop-up book artist. She dabbles in all kinds of mediums, from ceramics to photography. You can find her at www.gilbertstudios.ca