Written throughout late 2020 and early 2021, this collection of poems explores physical, emotional, political, and psychological divisions. When one thinks of literal, external lines, images, and/or metaphors of lines, ideas of defined borders, divides, and crossings emerge. Internal schisms (our collective mental health in crisis) also surface. Yet who or what determines these lines—who creates these divisions? What separates us—keeps us from making meaningful, logical, and human-centric connections and conclusions?

As individuals, we’ve been navigating the parameters and depths of isolation, and on a broader, geopolitical scale, our politics, generational worldviews, and growing social injustices have further divided us.
Written throughout late 2020 and early 2021, this collection of poems explores physical, emotional, political, and psychological divisions. When one thinks of literal, external lines, images, and/or metaphors of lines, ideas of defined borders, divides, and crossings emerge. Internal schisms (our collective mental health in crisis) also surface. Yet who or what determines these lines—who creates these divisions? What separates us—keeps us from making meaningful, logical, and human-centric connections and conclusions?
The Cohen influence on this collection begins with the lyrics of the song: “Like a bird on a wire / I have tried, in my way, to be free…” The significance of this imagery is the most concrete to the collection (outside of the map). Every morning throughout 2020 and 2021, I’d watch birds sitting on a wire outside my flat window in Chicago (at the time). Some densely teetered on the wire in flocks, only to slowly peel away to reveal an isolated one or two.
This concept of birds densely huddled together, connecting and communicating during a time of humans isolating struck a chord. I’d originally envisioned “birds imagery“ of some sort being pulled through the entire book (illustrations or collage at the top of each page); first, many of them, and then, slowly, as the poems progress, birds disappearing until there are none. Alcuin-award winner and book designer, Mark Goldstein, deftly prescribed his minimalist touch to the cover of the chapbook—conveying the emptiness of the wire once the birds left.
About the map
Brendan Lorber, an artist and poet based in NYC, lent his specialized cartographic skills to the chapbook. I had originally envisioned this book to also metaphorically / visually exemplify how physical and emotional states and boundaries were entered and crossed during the pandemic, and including a physical map seemed a fitting way to navigate the poems as they were representative of different ways humans were divided and/or separated throughout the crisis (and prior).
IG  @brendanlorber 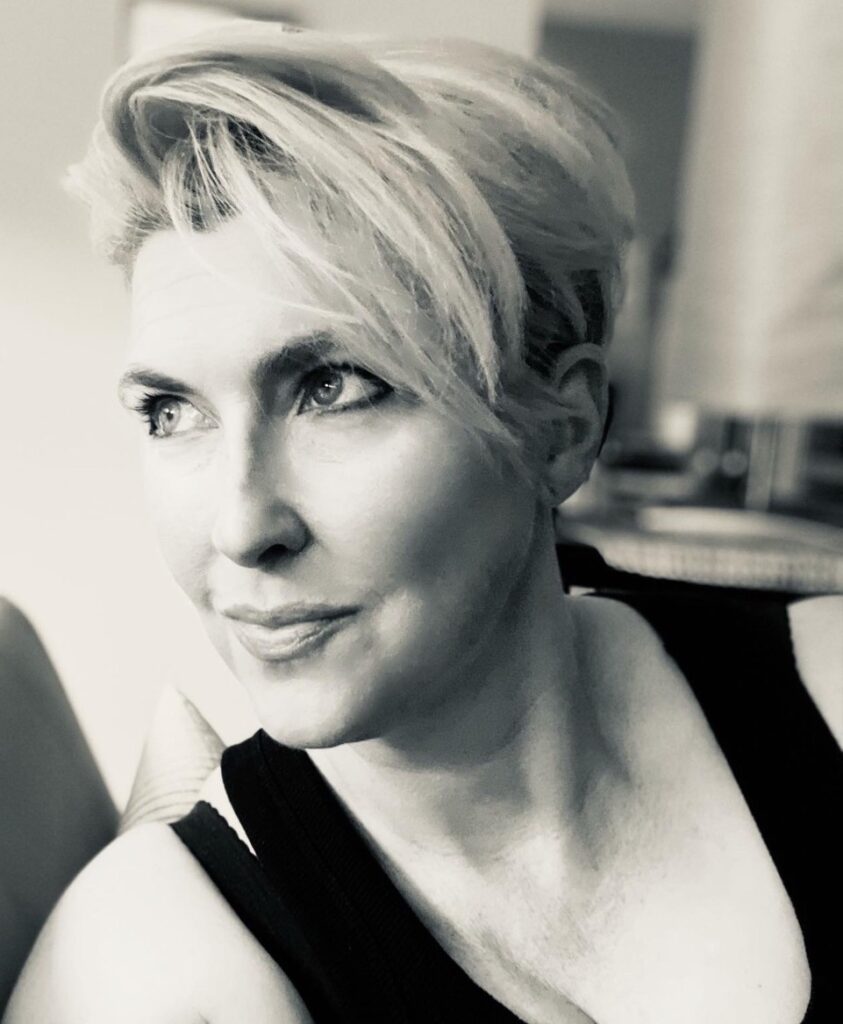 Her 2019 collection of cinepoems, based upon her chapbook, White Stockings,  was a collaboration with visual artist, Tess Cortes and were screened at the  Association for the Advancement of Baltic Studies (AABS) conference at Stanford University as well as at the Ready Freddy Film Festival in Chicago.  In 2020, she received a PEN America Relief Grant.

In 2019, she was nominated by Spoon River Poetry Review for an Illinois Arts Council Award; published an essay in an  anthology dedicated to the poetry of Lithuanian filmmaker and Anthology Film Archives founder, Jonas Mekas, titled  Message Ahead: Poets Respond to the Poems of Jonas Mekas (Rail Editions – Brooklyn Rail); and performed voice over narration in the independent documentary film, George: The Story of George Mačiunas & Fluxus, which was  directed by Fluxus taxi driver and artist, Jeffrey Perkins, and features Yoko Ono. The documentary has been screened  at MoMA as well as in Amsterdam, London, and Vilnius.

Lina Ramona is past winner of the Henry Miller Memorial Library Ping Pong Journal Award (selected by Eleni  Sikelianos) and of The Poetry Center of Chicago’s Juried Reading Award (selected by Brenda Hillman). In 2000, she  earned an M.A. in Creative Writing from Wright State University, where she participated in a summer workshop with  Nikky Finney, the 2012 National Book Award Winner in Poetry.

In 2018, she was a participant in the first-ever World Lithuanian Writers’ Forum (presented by the Lithuanian World  Community Organization, the Lithuanian Writers’ Union, and the Institute of Lithuanian Literature and Folklore), as well  as an anthology contributor for the forum’s master publication, and in 2009, she was nominated by Another Chicago  Magazine for an Illinois Arts Council Award for her short fiction.

Lina has served as the Chicago Poetry Correspondent of OmniVerse; as faculty member and marketing manager at  the Chicago School of Poetics; as well as the co-editor/designer—with poet Larry Sawyer—of the 20+ year-running  online literary magazine, milk magazine (featuring Robert Creeley, Wanda Coleman, Ron Padgett, Michael McClure,  and Japanese surrealist, Yamamoto Kansuke, among others).