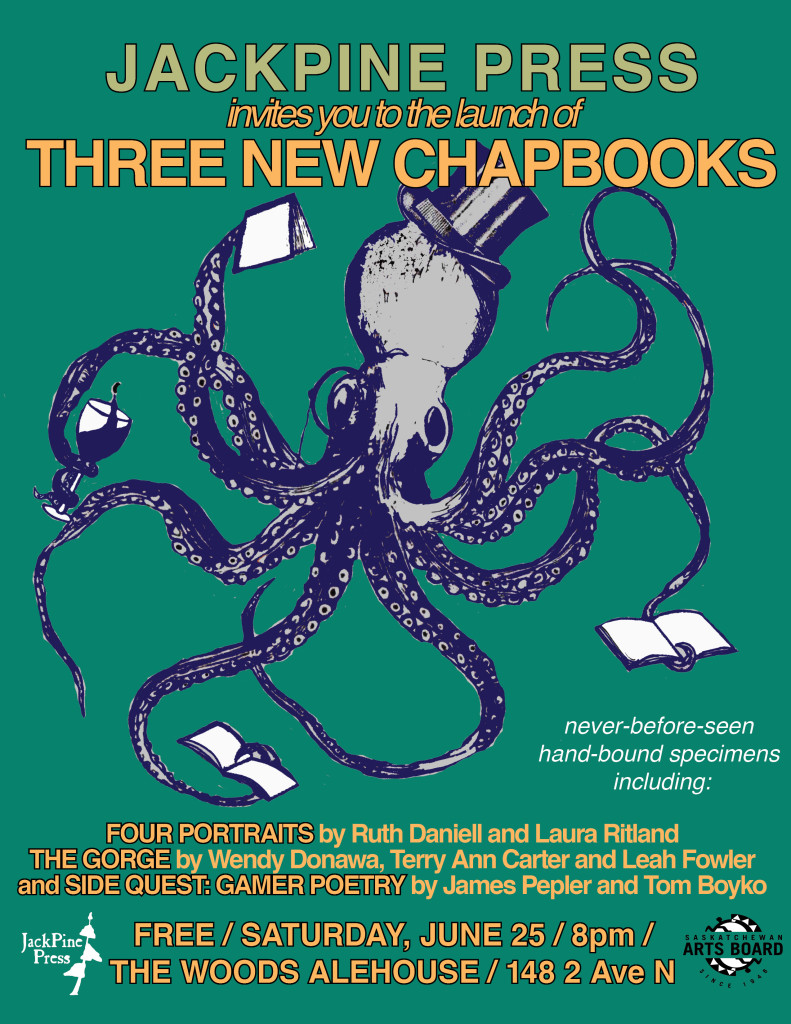 Join us to celebrate three new beautiful limited editions at the Woods Alehouse on Saturday, June 25th, 2016 at 8pm. Read on for more about the books, and the people who made them:

The Gorge: A Cartography of Sorrows, by Wendy Donawa and Terry Ann Carter (with Leah Fowler) is a suite of poems about the Gorge, the waterway running inland from Victoria’s Harbour. Constructed from cotton rag archival paper Japanese stab stitched by hand, The Gorge is illustrated with archival and contemporary photographs, maps, and drawings.

Wendy Donawa was born in BC, but settled in Barbados, where she spent three decades as a teacher, artist and museum curator. Since returning to the BC coast, her poetry has appeared in Arc Poetry Magazine, Prairie Fire, Room, and Freefall. She was a finalist in The Malahat Review‘s 2013 Open Seasons Award and the Cedric Literary Award. She is also the co-author of Reading Canada (Oxford University Press, 2013). Her newest title, Thin Air of the Knowable, is forthcoming with Brick Books.

Terry Ann Carter is a poet and paper artist; the author of four collections of lyric poetry and five chapbooks of haiku. A Crazy Man Thinks He’s Ernest in Paris was shortlisted for the Archibald Lampman Award; day moon rising was shortlisted or the Acorn-Plantos People’s Poetry Award. Light the Global Lantern: A Teacher’s Guide to Writing Haiku and Related Literary Forms is found in many Canadian and American high school college classrooms. Terry Ann is the President of Haiku Canada, a member of the BC Islands chapter for the Canadian Bookbinders and Book Arist’s Guild, and an instructor of Japanese literary forms at Royal Roads University. 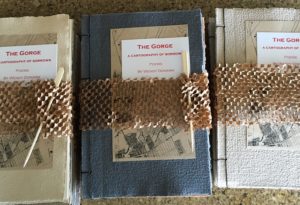 Four Portraits, by Ruth Daniell and Laura Ritland, is a conversation that combines co-written poems and pen and ink drawings, bound accordion-style and wrapped with a windowed cut-out wrap.

Ruth Daniell is originally from Prince George, BC, but lives in Vancouver. She is the 2014 winner of the Young Buck Poetry Prize with Contemporary Verse 2, and her poems have also appeared in Room, The Maynard, Qwerty, Grain, and Arc Poetry Magazine. She holds her MFA in Creative Writing from the University of British Columbia and teaches at the Bolton Academy of Spoken Arts.

Laura Ritland’s poems have appeared in places like The Maynard, The Hart House Review, CV2, The Malahat Review, Arc Poetry Magazine, and Maisonneuve. She is the recipient of the 2014 Malahat Review’s Far Horizons Award for Poetry, a graduate of the Masters in Creative Writing program at the University of Toronto, and a current interviews editor for Canadian Women in the Literary Arts. She lives in Vancouver, BC.

Side Quest, by James Pepler and Tom Boyko, is an adventure. Readers dive into a colourful world of fun and fantasy with every turn of the page. It’s a playful read, one that marries two unlikely bedfellows – gaming and poetry. But that is the essence of the book, unpopular choices made beautiful. The poems are more a testament to growing up with game culture than they are about the games themselves. This chapbook offers a reflection of ourselves, a brush stroke of passions that we grew up with and still hold onto today.

James Pepler is a nerd, and has been since before it became en vogue. He enjoys gaming in all its shapes and forms. Only second to his love for nerd cultures is writing about them. With an MFA in Writing from the University of Saskatchewan, he expresses his passion for this love through poetry, short story, and novella.

Tom Boyko teaches in Saskatoon where he lives with his wife Tracy and son Joel. Tom studied drawing with Gail Adams in his youth and developed his skills at the University of Saskatchewan. His hobbies and influences include video games, comic books, movies and pop culture.