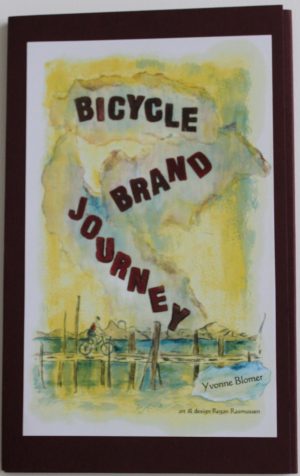 Bicycle Brand Journey is a series of poems based on a cycling tour Yvonne and her husband took in Southeast Asia. The poems are inspired by the trip and the game of cribbage – a game they played on rainy days and in quiet villages. Ultimately, though, these are love poems. Poems that reflect on the connection between two cyclists and the world they cycle through; a world we all inhabit and influence as human beings. They are poems centered on humanity.

This project was a deep and direct collaboration as Regan took the poems and crafted visuals offering an entry point into each poem – a glimpse – while leaving space for individual interpretation. The cards, housed in hand-made folders, are digital reproductions of originals comprised of text and mixed media drawings. There are 14 poems in total – as if two people were playing cribbage, with a dummy hand, a card for the cut and a Joker. The gold dot paper recalls the pegging holes in a cribbage board. The cards can be arranged and rearranged for reading, just as a deck of cards can be shuffled.