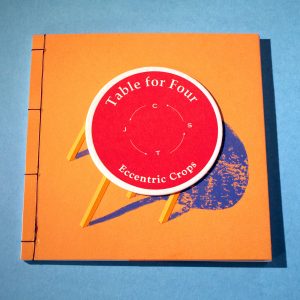 Table for Four: A collaborative Setting by Eccentric Crops

“Steven invited us to make text together. We decided to work with quoted material. We imagined ourselves sitting at the cardinal points of a table.
Jennifer suggested we pass versions around, widdershins.
Numerous constraints were occasionally obeyed.”

Colin Smith was once strongly allied to the Kootenay School of Writing in Vancouver.
He lives now in Winnipeg, occupied Anishinaabe akiing. Last book out was Multiple Bippies (North Vancouver: CUE Books, 2014).

Jennifer Still is a Winnipeg poet exploring the intersections of language and material forms. In 2002 she co-founded JackPine Press in Saskatoon and released her first chapbook, Remnant. Her latest full-length collection, COMMA (Book*hug 2017), reproduces several limited-edition, hand-assembled works she wrote and collaged in her home.

Steven Ross Smith, over three decades, has crafted the multi-book poetic series fluttertongue. The seventh book is in progress. He appears in print, audio, and video locally and internationally. See fluttertongue.ca.

Ted Landrum is the maker of Midway Radicals & Archi-Poems (2017) and a collaborative chapbook, Room to Room: Poetry & Architecture in Conversation (2018).
He teaches at the University of Manitoba and builds an archive at www.ubuloca.com.