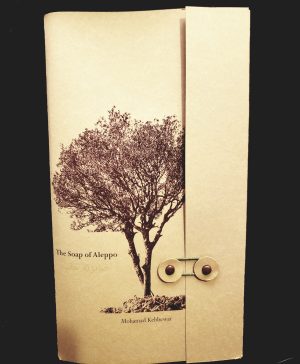 The Soap of Aleppo

JackPine Press introduces to the world: The Soap of Aleppo by Mohamad Kebbewar

The pages are hand bound in a saddle stitch, and then the booklet is glued inside, next to a series of Mohamad’s photographs printed on a transparent vellum in sepia tones.  We wanted to echo the ghostlike feeling of the city as we witness the story of its destruction.

Mohamad Kebbewar was born and raised in Aleppo. Since the start of the Syrian conflict, he found peace in writing. He was educated in Canada and spent half of his life here. After the fall of Aleppo in late 2016, he decided to go back, visit his parents, who despite all warnings decided to stay in Aleppo, and witness the destruction of the old city that was always the love of his life and a point of pride—The oldest continuously inhabited city in history. While writing his novel and collection of poems, he was often guided by Edward Munch’s masterpiece The Scream as he often found himself screaming inside his head at the war in his country and what was happening to his beloved city—Aleppo. He is currently putting the final touches of his first novel The Bones of Aleppo. You can connect with him on Facebook.